What is blow molding? 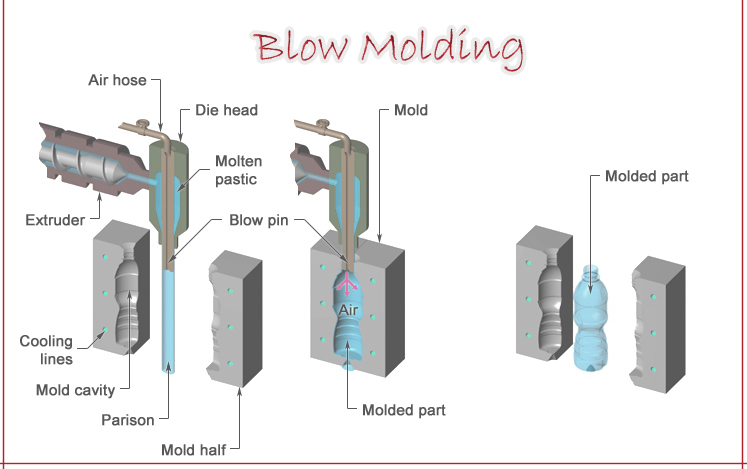 Blow molding is common for the manufacture of hollow objects weighing more than 350 grams from the most common polymer materials, such as: LDPE, HDPE, PP, PS, PC. The parison (continuous sleeve), which is produced by an extruder, a continuous-action unit, serves as a blank for blowing.

Due to the continuous process of extrusion of the parison, the structure of the melt in it is uniform along its entire length. It has a beneficial effect on the physical properties of the molded part.

What is the blowing process?

However, the blow molding process itself is cyclical, which introduces certain difficulties in the practical aspect of the process implementation - during the formation of the next parison of the required length, a whole sequence of phases must be comes out: closing, blowing, cooling the product and removing it from the mold. I had to solve this problem in different ways: continuous extrusion and cyclic process.

The parison (continuous sleeve), which comes by an extruder - a continuous unit, serves as a blank for blowing. Due to the continuous process of extrusion of the parison, the structure of the melt in it is uniform along its entire length. It has a beneficial effect on the physical properties of the molded part.

In machines of this type, the processes of parison extrusion and blow molding are parallel. This comes due to the reciprocating movement of the carriage with the mold from the position of gripping the parison and cutting it from above to the position of directly calibrating the neck and blowing it out.

Thus, at the moment when the parison comes out to the required length from the extrusion head, the carriage is in a position under the parison with open mold plates on both sides of the parison, the plates close, pinching the parison at both ends.

Why vacuum is provided?

Vacuum is also provided in the mold. Simultaneously with the closing of the mold, the parison trimswith a guillotine or rotary knife. After that, the carriage with the mold moves to the blowing position, where the blowing mandrel enters the neck. The blow molding blowing mandrel blows the parison, as a result of which the product is molded.

Why moveable gates are common?

The method makes it possible to obtain containers with a displaced neck that are asymmetric about the vertical axis. It is also possible in blow molding to mold regular and recessed handles, obtaining characteristic canisters of the most varied shapes and capacities. To obtain recessed handles, molds with movable gates are common, which squeeze the parison under the molded handle.

What must be the thickness of the parison?

Taking into account that the drawing of the parison will be different along its entire length. Moreover, it depends on the design of the container it is necessary to ensure the corresponding difference in thickness of the parison in certain segments. - Where the final position of the wall of the finished product is farther from the axis of the parison.

This will ensure the uniformity of the wall thickness of the product in its most diverse areas of blow molding. Correction of the parison thickness comes out in the extrusion head itself at the last section of the sleeve calibration. It is due to the relative movement of the outer ring and the calibrating mandrel, which forms the inner surface of the parison.

How the thickness can be controlled?

The inner surface of the outer ring of the extrusion head has a conical shape. Moreover, it makes it possible, by changing the relative position of the calibrating mandrel and the outer ring. It is to change the thickness of the parison ring.

How the productivity is increased in molding process?

To increase the productivity of the molding process blow molding, multi-strand dies are common. Here it divides into several strands and passes through a block of extrusion dies, in each of which a separate parison comes.

What is the disadvantage of multi-strand system?

Serial machines can have from 4 to 16 strands. The number of cavities in the mold, like blowing mandrels, corresponds to the number of strands in the extrusion unit. Obviously, the main disadvantage of multi-strand systems is their high initial cost (including tools) and high operating costs.

Therefore, with relatively small batches and the need to periodically switch to another design, it is most reasonable to stop at four-slot machines. In addition, even with a small number of cavities, the process of blow molding productivity is easy to increase by using a machine with two blowing stations.

How we can decrease cost and increase production?

In this case, a more efficient extruder serves two carriages with molds located on both sides of the extrusion head at once. They seize the parison one by one and send it to the blowing station. This design provides an 80% increase in productivity. But at the same time it is only 30% more expensive than single-station models. 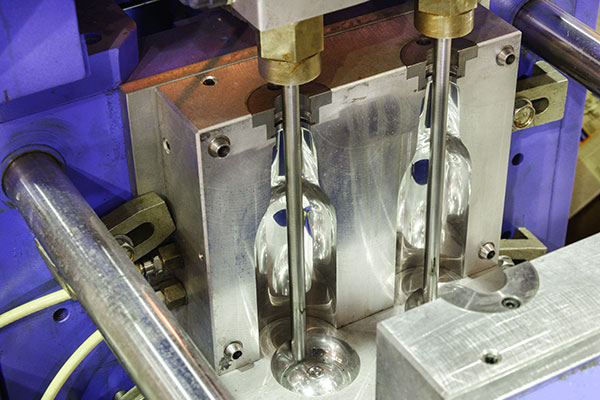 Blowing in machines with a reciprocating